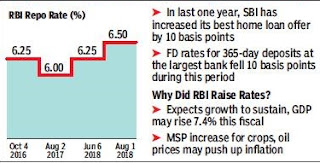 Loans for individual and business borrowers will inch up in the coming months with the Reserve Bank of India’s monetary policy committee voting in favour of a 25 basis point rate hike. The RBI raised its repo rate to 6.5%—the second increase in two months after consumer inflation remained stubbornly above 4%— the target mandated by the Modi government.

This is the first time that the six-member MPC, since its constitution in 2016, has voted for hiking rates in two successive meetings. While the trigger for the RBI’s rate action is clearly inflation, the policy statement has been very positive on the economic front. The increase in rates could raise cost of borrowings for banks which, in turn, will increase their marginal cost of lending rate, which is reviewed every month.

“Various economic indicators suggest that economic activity has continued to be strong. The progress of the monsoon so far and a sharper than usual increase in minimum support price of kharif crops are expected to boost rural demand,” RBI governor Urjit Patel said.

He added that non-food credit has risen 13% this fiscal, investment activity remains firm and the output gap has almost vanished. While sounding a caution on oil prices, the RBI governor said that foreign direct investment inflows have improved even as portfolio outflows have slowed.

In the post-currency interaction, RBI deputy governor Viral Acharya warned that currency in circulation was rising, and could reduce liquidity in the banking system.