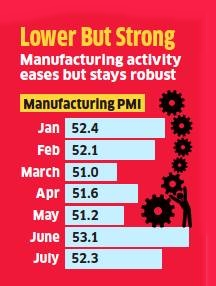 Manufacturing activity eased marginally in July after reaching a seven-month high in June following lower output growth and new orders, but demand continued to be strong.

The Nikkei India Manufacturing Purchasing Managers’ Index declined to 52.3 in July from 53.1in June. A reading of over 50 on this survey-based index indicates expansion, below that contraction.

The index is based on a survey conducted among purchasing executives of more than 400 companies. The survey cited anecdotal evidence pointing to favourable market conditions and strong demand from international markets for Indian goods.

Survey respondents said that steel and crude oil were among the key items whose prices increased but overall, input cost inflation eased from June.

The Reserve Bank of India raised key rates on Wednesday by 25 basis points, its’ second after the previous policy announcement in June.

Hardening of input price pressures was one of the eight risks to inflation that the bank highlighted on Wednesday, the others being — crude oil, volatility in global financial markets, minimum support price, households' inflation expectations, monsoon, fiscal slippage and revision of house rent allowance.

Looking ahead, Indian manufacturing companies held optimistic projections for output in the next 12 months. Expected improvements in demand, promotional activities and expansion plans were the key factors behind confidence.

The level of positive sentiment strengthened to a three-month high during July but some respondents expressed fears of a potential slowdown in the year ahead.