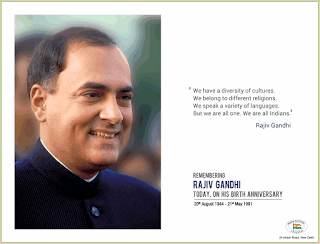 Gandhi’s son, Congress president Rahul Gandhi also took to Twitter to remember his father as “a kind, gentle and affectionate man” whose passing had left a deep void in his life. “I remember the times we had together and the many birthdays we were lucky to celebrate with him when he was alive. He is greatly missed, but his memory lives on,” Rahul tweeted.

Earlier in the day, Rahul accompanied his mother Sonia Gandhi and sister Priyanka Vadra to pay their tributes at Veer Bhumi.

Sonia Gandhi, when conferring the Rajiv Gandhi Sadbhavna Award to former West Bengal governor Gopal Krishna Gandhi, who is also the grandson of Mahatma Gandhi, said that though her husband’s tenure in politics was short, he laid the foundation for IT, telecommunications and computers — paving the way for India’s entry into the 21st century.

“He was responsible almost single-handedly for changing the structure of our polity by the Constitutional empowerment of panchayats and nagarpalikas through, among other things, reservation for women. Rajiv Gandhi was an unwavering believer that India’s unity was actually derived from, and strengthened by her incredible diversity,” she said. “Technological capability would have little value in a climate of growing scientific obscurantism and social prejudice. We have seen that the opening of the economy and the closing of the mind is a dangerous and destructive mix.”

Also present in the meeting was former prime minister Manmohan Singh, who said that the values Rajiv Gandhi espoused, which are “a broad secular outlook, the spirit of tolerance, commitment to communal harmony and empathy to others” are those that define India’s nationhood.