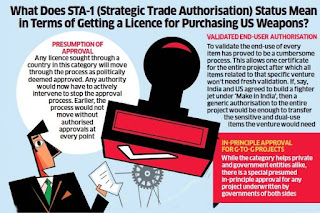 US President Donald Trump’s decision to grant India the STA-1 trading status equivalent to American allies for procurement of military weapons is a big rebuff to China for blocking India’s entry into the Nuclear Suppliers Group.

In making this call, the US President has relaxed a key condition set by the Obama Administration that India would be eligible only after it had secured the membership of all four technology control regimes — the NSG, the Missile Technology Control Regime, the Wassenaar Arrangement and the Australia Group.

India became a member of three of these, except for NSG where China has continued to block a consensus. After an unsuccessful attempt at securing NSG membership in the last few months of the Obama Administration, India had asked US to reconsider its conditions.

New Delhi’s case was that by blocking India’s case at NSG, Beijing had also put on hold Indo-US cooperation on co-production of defence equipment as well as bilateral transfer of high-end technology. The STA-1 will make this easier.  Only two other Asian countries, Japan and South Korea, are in this category.

There are two US arms control lists. One, the International Traffic in Arms Regulations list, which comes under the State Department. The other is the Export Administration Regulation list controlled by the Commerce Department.

In 2013, the Obama administration moved a bunch of sensitive items from the ITAR to EAR list. The EAR was then recast to make military commerce easier. In this rejig, India fell in the category of Strategic Trade Authorisation -2 while America’s closest allies were placed in STA-1. The licensing requirements are qualitatively different in these two categories, which is where the challenge lay in steering the India case forward.

India was not an ally and wasn’t going to define itself as one either. So, a decision was made in the dying days of the Obama Administration to give India Major Defence Partner status. But for it to have full effect, the EAR had to be amended to insert MDP category in STA 1.

The US Congress simultaneously passed a legislation ascribing the MDP description in law. This was not really needed as all this is within the US administration’s remit. Officials would like to call this a parallel process that just converged in the end.