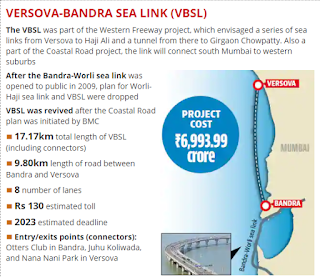 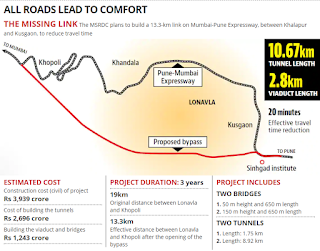 The Maharashtra government’s cabinet sub-committee gave the final nod to three crucial infrastructure projects: Bandra-Versova sea link, a bypass on the Mumbai-Pune Expressway and a third six-lane bridge on the creek at Vashi on the Sion-Panvel highway. Chief minister Devendra Fadnavis, who heads the cabinet sub-committee on infrastructure, directed that work on all these projects start within a month.

A consortium of Reliance Infrastructure and Italy’s Astaldi will build the 10 km Bandra-Versova sea link in five years. The government awarded the Rs.6,994-crore project to the consortium though the bid, lowest among the five in the fray, was Rs.1,477 crore higher than the Rs.5,516 crore estimate made by the state in 2016 while inviting bids.

While L&T will build the six-lane Thane Vashi creek bridge at a cost of Rs.560 crore to make it compatible with the recently widened (12-lane) Sion-Panvel highway, Navayuga Engineering and AFCONS Infrastructure will build eight-lane tunnels and bridges respectively for the proposed Mumbai-Pune Expressway bypass between Khopoli and Sinhagad institute to reduce traffic congestion in the Lonavala ghat section.

Construction of the sea link, which is expected to reduce the travel time between Bandra and Versova to around 10 minutes, is likely to begin in October. Connecting the Bandra-Worli sea link with the western suburbs up north, the new sea bridge will have two ramps: At Otter’s Club near Carter Road in Bandra (W) and Juhu-Koliwada, apart from the exit at Versova. However, the smooth drive will come at a premium for motorists as the minimum toll will be Rs.130 when the sealink opens by 2023.

The Rs.4,794-crore 13-km Expressway bypass project will separate traffic on the Expressway and the old Pune highway that presently shares the road on the 10-km Lonavala-Khandala ghat section and gets stuck in snarls, and reduce travel time between the two cities by 25 minutes. It will be built in two phases: Navayuga Engineering will build the 11-km tunnels at a cost of Rs.2,670 crore and AFCONS Infrastructure will build the 2-km-long cable-stay six-lane viaducts for Rs.1,492 crore.

The expansion of the six-lane Vashi creek bridge by adding another six lanes will enhance its capacity and reduce traffic congestion. The maximum capacity of the bridge is 12,500 passenger car units (PCUs) per day, but 17,000 PCUs use it at present. As part of the project, the Vashi toll naka too will be modernized. The cabinet sub-committee also approved the formation of a special purpose vehicle under the MSRDC to help mobilize funds for projects on the Mumbai-Pune Expressway, like the missing link between Khopoli and Khandala.