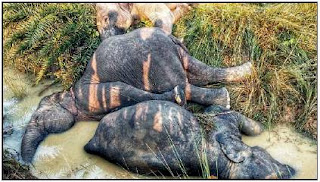 At least seven elephants were electrocuted after coming in contact with a live wire hanging dangerously low near Kamalanga village in Odisha’s Dhenkanal forest division.

Forest officials said a herd of 13 jumbos was passing through the village in Sadar Forest Range when seven of them got electrocuted by an 11 kv line. The seven included five female elephants and a calf. Their carcasses were found lying in a ditch early on Saturday.

While Odisha energy secretary Hemant Sharma conceded that they had received information about the movement of elephants in the area 10 days ago, Cesu authorities denied having received any such information. Sharma said Cesu had put up temporary electric lines to supply power to a construction company building a railway over bridge near Kamalanga, adding that “an investigation will be carried out.”

Sources said the pole-mounted cable lines was at a height of eight feet above the ground. According to forest guidelines, power lines should be at least 17 ft from the ground.

Of the 42 elephants that have died of electrocution due to sagging electric wires in Odisha since April 2010, at least 18 were killed in Dhenkanal. The opposition BJP and Congress demanded resignation of energy minister Sushant Singh and forest minister Bijayshree Routray.