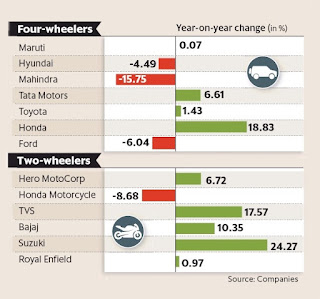 Commercial vehicle sales continued to expand, thanks to a low base to compare with, but industry executives said rising fuel price is the matter of concern in this segment as well.

In two-wheelers, growth slowed down, primarily because of the increased insurance cost.

Maruti Suzuki, which makes more than half the cars sold in the country, posted a tepid 0.7% increase in September domestic sales compared with a year earlier, while at No.2, Hyundai Motor India, volumes fell 4.5%.

In the past six months, the price of petrol has increased 14% and that of diesel 17%, according to the Petroleum Planning & Analysis Cell. While this has increased the running cost of vehicles, a Supreme Court order mandating long-term insurance cover has increased the ownership cost. Both factors, said industry executives, led to the subdued demand.

In the PVs, too, high inventory levels seem to be a concern ahead of the festival season. Sales had fallen in the previous two months as well in the segment.

Maruti Suzuki, to push the stock at dealers, is giving discounts and benefits of ₹10,000-15,000 on its top-selling models like the Baleno, Swift and Dzire.

Tata Motors posted higher sales for the third straight month in its PV business, but the pace has slowed for the company as well.

In two-wheelers, the need to pay for longer insurance cover damped demand, though widespread rainfall and rising rural demand have helped the segment grow marginally.

Total sales of market leader Hero MotoCorp rose 6.75%. At Bajaj Auto, sales in the past month were the highest ever at 502,009 units. In the commercial vehicle space, Tata Motors, Ashok Leyland and Mahindra posted sales growth of between 19% and 26% in September.