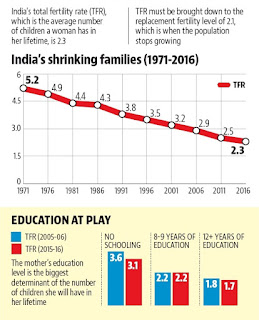 The shrinking size of families in India contributed to India’s economic growth in the 1980s and 1990s, a United Nations report has found. India’s family size has steadily declined and continues to — from 5.2 children per family in 1971 to 2.3 in 2016, which means the family size itself has fallen from 7.2 to 4.3.

It isn’t just in India; shrinking family sizes contributed to Asia’s economic miracle in the 1980s and 1990s, including in China, according to the State of the World Population Report 2018 by the United Nations Population Fund. Still, India deserves special mention because it has, along with Bangladesh, El Salvador, Nepal, Myanmar and Nicaragua, fertility rates that are near replacement level, despite having lower per capita incomes than other countries with replacement-level fertility (or the total fertility rate — the average number of children born per woman— at which a population merely replaces itself from one generation to the next). “In most other parts of the world, such low fertility is achieved only at higher levels of income. These countries have made gains in human development, reflected in improved health,” said the report.

India’s population has doubled since 1971, from 566 million to 1.35 billion in 2016. The total fertility rate in urban India has already fallen below replacement levels of 2.1. But wide disparities remain between states and within districts within states. “Although average total fertility for the whole country is 2.3 births per woman, it is above 3 in Uttar Pradesh, Bihar and Madhya Pradesh, and below replacement level in Maharashtra, West Bengal and the four southern most states,” said the report.

What’s common across regions, however, is that women across all sections of society, irrespective of wealth, education and urban or rural areas, are having fewer children than ever before 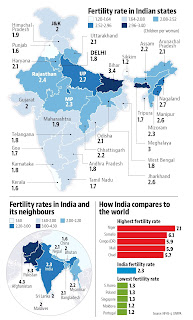