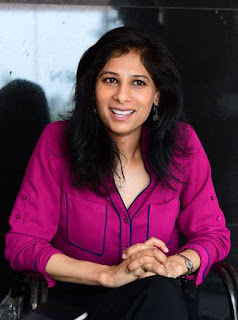 Indian-origin economist Gita Gopinath was appointed the chief economist of the International Monetary Fund, becoming only the second Indian after Raghuram Rajan to hold the prestigious post.

Rajan held the post from 2003 to 2006 before he joined the finance ministry as chief economic adviser and later the governor of the Reserve Bank of India.

Gopinath is a US citizen and an overseas citizen of India. She received her PhD in economics from Princeton University in 2001 after earning a BA from the University of Delhi and MA from both the Delhi School of Economics and University of Washington. She joined the University of Chicago in 2001 as an assistant professor before moving to Harvard in 2005. She became a tenured professor there in 2010.