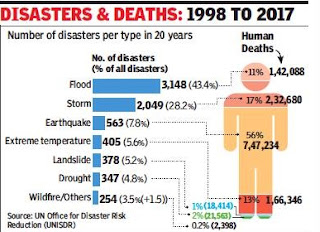 Climate change is causing more havoc than geophysical events like earthquakes and tsunamis. A study by UN Office for Disaster Risk Reduction shows how climate change has affected us in the past 20 years — of all the 7,255 disasters recorded globally between 1998 and 2017, floods accounted for 43% or 3,148 incidents followed by storms at 2,049. Together, floods and storms accounted for 72% of all disasters.

The UN report, released October 13, said about 91% of all disasters during 1998-2017 were caused by droughts, heatwaves, floods, and other extreme weather events, something that should alarm policy-makers in India as it is most affected by all climate change incidents. What is more worrying for low income nations like India is the fact that economic losses from up to 87% of disasters are not reported. Globally, disaster losses are estimated at $520 billion per year, pushing over 26 million people into poverty every year. The inequality is rising and far greater than projected, it added.

Though India is yet to develop a robust mechanism to capture all disaster losses, an estimate by an agency says annual loss of lives due to just floods is an average 1,600, while loss of properties is over Rs.1,800 crore per year. India has also seen hundreds of deaths yearly due to extreme weather-related events.

The UN report has listed India among top five nations in the world with $80 billion in absolute economic loss due to disasters in the past 20 years. The global warming of 1 degree celsius compared to pre-industrial level has already altered the disaster map — disasters related to climate change have doubled in the past 20 years, an average 329 per year, compared to 165 during 1978-1997.

During 1998-2017, storms, including cyclones and hurricanes, were second only to earthquakes in terms of fatalities, killing 2,33,000 people. Floods have affected the largest number of people, followed by drought affecting a further 1.5 billion in the past 20 years.