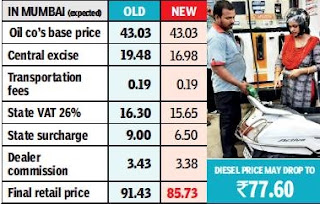 The Centre announced a reduction in petrol and diesel prices by Rs 2.50 a litre and nudged states to match the cut through a reduction in VAT to bring much-needed relief to citizens reeling under the burden of runaway fuel rates.

BJP-ruled states, including Uttar Pradesh, Gujarat and Haryana, apart from poll-bound MP and Chhattisgarh, responded, which will result in a reduction of the price of auto fuel in at least 11 states by Rs.5 a litre. Maharashtra announced a Rs.3.2 cut in petrol price, but a decision on diesel is pending. The decisions will give Mumbai’s petrol consumers a total relief of Rs.5.70 per litre mainly due to a reduction in value added tax and state surcharge. The new rates will be effective from Friday.

While Bihar, Odisha and Punjab will take a decision soon, opposition-ruled Delhi and West Bengal demanded a reduction of Rs.10 a litre. States such as Kerala and Karnataka opted to ignore the Centre’s request for lowering VAT, at least for the time being.

After holding out for nearly three months, the government decided to lower central excise on petrol and diesel by Rs.1.50 a litre and also instructed state-run oil marketing companies to pare retail prices by Re.1 a litre. Finance minister Arun Jaitley, who announced the cut, said the move was necessitated by an increase in Brent crude oil to a four-year high of $86 a barrel on Wednesday, and seven-year-high interest rates in the US.

The duty reduction will leave a Rs.10,500-crore hole in the Centre’s kitty during the current financial year with IndianOil, Bharat Petroleum and Hindustan Petroleum too bearing the brunt. The stock market responded adversely to the price cut with shares of the retailers crashing over 10%.

Jaitley said the impact on revenue would not hit the Centre’s fiscal deficit target for the current year, which is budgeted at 3.3% of GDP. “Now all states will be on test... Will have to see states where leaders were indulging in lip sympathy and tweeting, what would these states do,” he said, adding that states had benefited more from the rise in global crude prices. So far, the government had been reluctant to reduce duties citing adverse impact on public finances which, it feared, would also add to market uncertainty and stress the rupee.