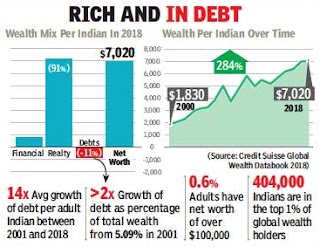 Amid rising concern over increasing inequality, the country created a whopping 7,300 more millionaires during the 12 months to mid-2018, taking the total number of dollar-millionaires to 3.43 lakh, who are collectively worth around $6 trillion, says a report.

According to Credit Suisse, the country is home to one of the highest proportions of female billionaires at 18.6% during the period, among the major countries. Of the total dollar-millionaires, 3,400 have wealth over $50 million, while 1,500 have over $100 million each, said the Credit Suisse’s 2018 global wealth report. And the number of the rich as well the inequality is set to widen by over 53% by 2023 when their number is set to cross an estimated 5,26,000 millionaires worth around $8.8 trillion.

The report said Indians’ personal wealth is dominated by property and other real assets, which make up 91% of estimated household assets. Over the past 12 months, non-financial assets grew by 4.3%, accounting for all of the wealth growth in the country, it noted. House-price movements are a proxy for the non-financial component of household assets, which reached a high of 9% for the country.

Globally, the US continues to lead the rich club for the 10th year in a row. During the reporting period too, the US contributed the most to global wealth, adding an $6.3 trillion, taking the total to $98 trillion. China is home to the second-largest number of wealthy households, having added $2.3 trillion to reach $52 trillion.