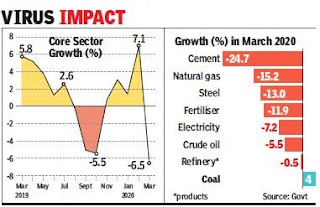 The eight core sector industries, which account for over 40% of the index of industrial production, slumped 6.5% in March — the steepest monthly fall since the series was constructed in 2011-12 — as the deadly coronavirus severely hit output across sectors and highlighted the pain ahead for the industrial sector.

Coal was the sole segment that recorded growth, as the remaining seven saw lower production with cement, steel and fertiliser reporting double-digit decline. Although the nationwide lockdown started in the last week of March, several states had taken measures before that and companies had begun readjusting their production, factoring in the spread of the virus.

Including the previous series (which is strictly not comparable), this is the sharpest monthly decline since April 2005. Economists warned that the core sector index paints a grim picture for IIP and the situation could deteriorate in April, when there was a nationwide lockdown. The 40-day lockdown has stalled economic activity but now the Centre has allowed some manufacturing units to restart, while there are expectations that there will be staggered exit from the lockdown.