Byappanahalli AC rly terminal to be ready in February 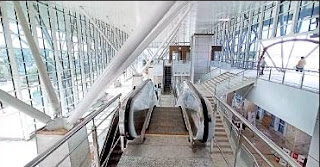 The country’s first centralised AC railway terminal is all set to come up in Bengaluru.

South Western Railway officials said Sir M Visvesvaraya Terminal Bengaluru (Byappanahalli Third Coaching Terminal) will be ready by the end of February. “At present, only a few spaces like retiring rooms at railway stations are air-conditioned, but this terminal will have centralised AC system. This will offer an airport-like experience for rail passengers,” said E Vijaya, chief public relations officer, SWR.

The Indian Railway Stations Development Corporation is planning centralised AC system in stations like Habibganj in Madhya Pradesh and Gandhinagar in Gujarat under the public-private partnership model.

The Byappanahalli terminal’s facade is designed on the lines of Bengaluru airport.

Currently, 164 pairs of express trains and 109 pairs of passenger trains are being operated from KSR Bengaluru City and Yeshwantpur terminals. The new terminal, which was sanctioned in 2015-16, is expected to help SWR operate more trains from Bengaluru. Work on the terminal, which was supposed to be completed in December 2018, missed several deadlines.

The Rs.314-crore station building of 4,200sqm will cater to a daily footfall of 50,000. The terminal has seven platforms apart from eight stabling lines and three pit lines. Every day, 50 trains can be operated from the terminal.

The terminal will have parking facilities for 250 cars, 900 two-wheelers, 50 autorickshaws, five BMTC buses and 20 cabs. “The terminal will have upper-class waiting hall, VIP lounge with digital real-time passenger information system and food court. The escalators and lifts will connect seven platforms to facilitate passenger movement. Foot over-bridge along with two subways will link all platforms,” said an official. A water recycling plant of 4 lakh litre capacity will be installed.