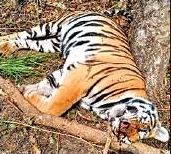 A two-year-old tigress has choked to death after getting trapped in a wire snare set up by poachers in the buffer area of Kanha National Park in Mandla district of Madhya Pradesh.

The more it struggled, the tighter it got strangled. Blood flowed from its nostrils in the agonizingly slow death.

The carcass was seen by a beat guard of Bamhani village on Wednesday morning. He called forest officials to say he had spotted a tigress lying inert. A team sped to the spot and found that it was dead.

The foresters found a snare, made from two-wheeler clutch wires, around its neck and nasal bleed. All the organs were intact. Samples were collected for forensic investigation and the carcass disposed of according to NTCA rules.

Investigators say that poachers may have laid the trap for wild boars. A dog squad was used to pick up the poachers’ trail. Kanha wildlife doctor Sandeep Agrawal and National Tiger Conservation Authority representative Shravana Goswami are leading the probe. Six suspects from near the scene of the incident have been summoned for questioning.

Madhya Pradesh has lost around 30 of its tigers and an equal number of leopards to unnatural causes in the last 15 months, say sources. Environmentalist Ajay Dubey said that MP is No. 1 in terms of tiger deaths.

“Since the state has regained Tiger State status, they are taking casualties very lightly. I will definitely raise this matter with the Central government soon. One has to question these authorities about where they are spending the crores of rupees being sent for tiger conservation,” Dubey said.