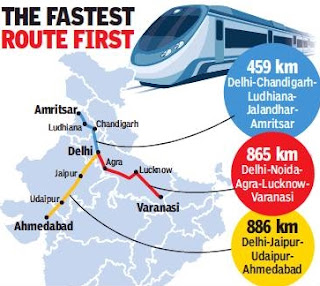 The bullet train corridor from Delhi to Varanasi via Agra and Ayodhya will start from Sarai Kale Khan-Nizamuddin railway station, while the other two corridors to Amritsar and Ahmedabad from Sector-21, Dwarka Metro station and Bijwasan areas.

These are three of the seven new routes that the government has planned for which detailed studies are being conducted. Sources said the railway ministry would go for public-private partnership to implement some of these new corridors. Currently, work has started only on the Ahmedabad-Mumbai High Speed Rail or bullet train project with 100% government funding. National High Speed Rail Corporation Ltd is implementing the project and has also been tasked to prepare a detailed project reports of the new seven lines.

An NHSRCL official said, the option of the HSR station in close proximity of Sarai Kale Khan and Nizamuddin railway station for the Delhi-Varanasi corridor was being explored as this would provide good road connectivity to users through Outer Ring Road, Metro Rail connectivity through Pink Line, interstate bus connectivity through ISBT and regional rail connectivity through RRTS. The official said the locations were being explored for Delhi-Ahmedabad and Delhi-Amritsar HSR corridors in close proximity of Sector-21, Dwarka Metro station and Bijwasan Railway station since this would provide connectivity to IGI Airport and central Delhi through Airport Express Metro line and west, central and east Delhi along with Noida through Metro Blue Line. This would also be close to the upcoming International Convention Centre at Sector-25 and Gurgaon, the official said.

“Indian Railways is moving towards 360 degree development for freight transport and providing best in class passenger amenities with safe and reliable travel. The introduction of HSR is a work in progress . We are working towards achieving this goal by implementing Mumbai-Ahmedabad HSR corridor and exploring options for other high speed rail corridors,” said NHSRCL spokesperson Sushma Gaur.

A railway ministry official said the national transporter was getting “future ready” with HSR, dedicated freight corridors, modern stations, better passenger conveniences and amenities. “There is strict monitoring at the highest levels and the high speed rails and networks will soon be reality,” the official said.