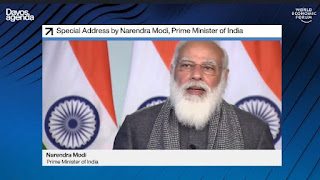 Prime Minister Narendra Modi on Thursday invited CEOs attending the World Economic Forum’s Davos Dialogue to invest in India, saying the country’s infrastructure needs would be worth about $4.5 trillion by 2040 and the government and industry must come together to meet this requirement.

“There are ample opportunities on offer, which are even more convincing as they are in a vibrant democracy, business-friendly climate and in a big market like India,” Modi said, inviting CEOs to align their future prospects with such opportunities and promising to give any help that they would need.

India’s Aatmanirbhar Bharat mission is fully committed to global good and the global supply chain and India now has a predictable and friendly environment — from tax regime to the FDI norms — Modi said in his opening address at the WEF summit via video link.

The Prime Minister said India is sending its vaccine to several countries and helping in developing the infrastructure for successful vaccination, thus saving the lives of citizens of other countries.

“The WEF should be reassured that only two make-in-India vaccines have come so far and many more from India will come. India’s upcoming vaccines will help other countries at a swifter pace, bigger scale, and more speed to fight the pandemic,” he said.

Modi also highlighted that India has vaccinated over 2.3 million health workers within 12 days and would complete its target of vaccinating 300 million old people and people with co-morbidities in the next few months.

Interacting with the CEOs of Siemens and ABB, Modi said the Aatmanirbhar Bharat campaign was launched to increase the capacity of India’s economy and its resilience and to make India an export hub for manufacturing.

Modi said India will release a National Logistics Policy and that foreign direct investment in India had increased by 13% in 2020 despite Covid-19.

The PM stressed that India is now walking ahead to become “Aatmanirbhar”, which will strengthen globalisation. “I assure you that every success of India will help the world to succeed. We have the capacity and capability to strengthen the global supply chain and reliability. We have a big consumer base and its expansion will benefit the global economy,” Modi said at the WEF.

He said India has given emphasis to reforms and incentive-based stimulus. “Even during Covid, India has paced structural reforms in all sectors. These reforms are being supported by PLI schemes. We are also matching our growth with climate change targets,” the PM said, stressing that India is committed to “climate-sensitive development”.

Modi pointed out that in the midst of numerous doubts, India had a message of belief, positivity, and hope from over 1.3 billion Indians.