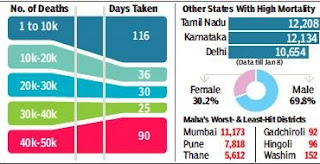 Exactly 307 days after the first Covid-19 case was reported in the state, Maharashtra reached a grim milestone on Saturday with its toll crossing 50,000. Seven out of every 10 dead Covid patients in Maharashtra had a chronic disease, and half the deaths were of patients who had more than two diseases or co-morbidities, an analysis done by the public health department revealed.

Data showed that 29.6% of the victims were in the 60-69 age-group, while every fifth person dead was either in his/ her fifties or seventies. Hypertension was the most common co-morbidity (46.7%), followed by diabetes (39.4%). Every fifth victim had both hypertension and diabetes. Only 11% of victims had heart disease.

With the 57 deaths it added on Saturday taking its toll to 50,027, Maharashtra, the worst hotspot for Covid in India, accounts for a third of India’s 1.51 lakh deaths. This means that for every three deaths in India, one is from Maharashtra.

The closest state in terms of deaths is Tamil Nadu with less than a fourth of Maharashtra’s toll at 12,208. Other worst affected states include Karnataka (12,134) and Delhi (10,654).

In a reflection of a global trend noticed since the pandemic broke out in Wuhan in December 2019, more men than women have died in Maharashtra. “The majority of deaths occurred among males at 69.8% (34,499), while the percentage of deaths among women is 31.2,” said Dr Pradeep Awate, who heads the epidemiology department of the state public health department.

“Maharashtra has a higher share of co-morbid patients than other states and data collection here is among the best,” said Dr Rahul Pandit, a member of the state task force on Covid-19.