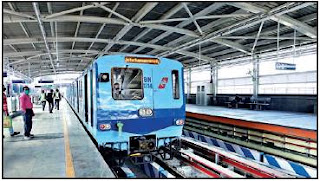 The second trial run for north-south Metro’s 4-km Dakshineswar extension was conducted, a fortnight after the first one was successfully completed.

Officials of Metro Railway and Rail Vikas Nigam Limited were present during the trial run. RVNL is the implementing agency of most of the Metro projects in the city, but it is the Metro Railway that runs the city’s rapid transit system — Line 1 or the north-south corridor and Line 2 or the East-West Metro. Once the new elevated section is added, commuters can travel from Dakshineswar on the northern fringes to Kavi Subhas (New Garia) in the south.

On board the rake 1214, the officials on Thursday inspected the entire stretch from Noapara to Dakshineswar via Baranagar. All the arrangements like signalling, third rail power supply, platforms, concourse, entry and exit gates, circulating area and other passenger amenities of Baranagar and Dakshineshwar stations were checked.

On December 23, the first trial was led by Metro Railway general manager Manoj Joshi, who had watched the train chug through the tracks from the motorman’s cabin. The GM, in a press conference on Wednesday, said that services along the new section were likely in February-end.

The authorities applied for Commissioner of Railway Safety’ inspection. CRS gives safety nod to a new Metro line. Preliminary nod from the CRS is pending.