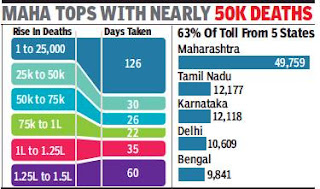 India became the world’s third country to record more than 1.5 lakh deaths from the Covid-19 pandemic, with the toll crossing the grim milestone amid a general decline in fatalities.

While India’s total fatalities from the pandemic are the third highest in the world after the US (3.6 lakh deaths) and Brazil (nearly 2 lakh), India has so far reported far less number of deaths per million population than the worst-hit countries. At 108, India’s deaths per million are lowest after Indonesia (84) among 20 countries with the highest Covid caseloads. The corresponding figures in the US and UK are 1,093 and 1,121, respectively.

Punjab has highest fatality rate of 3.2%

Although Punjab has reported relatively fewer deaths so far at 5,404, it has the highest case fatality rate in the country. CFR is the percentage of Covid patients who have succumbed to the infection. In Punjab, the CFR is 3.22%, more than double the national average of 1.45%. Maharashtra has the next highest CFR of 2.55%, followed by the tiny Himalayan state of Sikkim, where 2.18% of Covid patients have died so far.

On Tuesday, India reported 263 deaths from the virus, the highest single-day toll in the six days. With this, the cumulative deaths from the pandemic in the country rose to 1,50,097. Maharashtra continued to record the highest toll, with 64 deaths on Tuesday, followed by Chhattisgarh (25), Kerala and Bengal (24 each), and Uttar Pradesh (20).

Overall, however, the death toll has been decreasing with every passing week in the country. Last week (December 28-January 3), India registered 1,748 fatalities, the lowest since the last week of May.