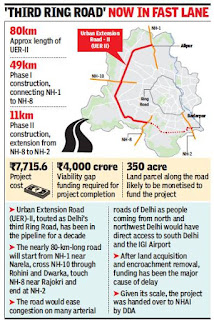 Delhi Development Authority’s Urban Extension Road-II, touted as Delhi’s third ring road, will make travelling from the northern end of the capital to Indira Gandhi International Airport and other southern areas a breeze. After a decade-long delay, the project is set to finally take off.

DDA handed over the project to National Highways Authority of India as it was felt the latter was better equipped to handle work of this scale. While DDA officials are tight-lipped about the UER-II, sources said that a proposal has been prepared to tide over the fund requirement of Rs.7,715.6 crore, with Rs.4,000 crore being the viability gap funding required for work completion.

The project, envisaged to ease congestion on the arterial roads of Delhi, has been delayed for almost a decade for various reasons, stuck, for instance, over the issue of funding for three years now. While it was earlier decided that DDA would hand over 125 acres along the road to NHAI, which the latter could monetise to generate funding, sources said that 350 acres could now be used for the purpose now, though a final decision is pending.

The nearly 80-km road will start from NH-1 near Narela, cross NH-10 through Rohini and Dwarka, touch IGIA and NH-8 near Rajokri and end at NH-2 near Badarpur. While a 49-km section between NH-1 and NH-8 and Nelson Mandela Marg will be completed in Phase I, Urban Extension Road will be extended 11 km to Badarpur in Phase II.

UER-II is part of the roads extension proposed in Master Plan for Delhi 2021. Land acquisition, particularly in areas like Mundka, Najafgarh, Dichaon Kalan, Kanjhawala, was a major problem. The other problem was large-scale encroachment on land through which the road was to pass. DDA managed to clear most of these encroachments and that is a reason the authority is keen that work should start quickly to prevent re-encroachments.

Sources said NHAI wanted DDA to fund the project, but DDA felt that NHAI should instead put up toll barriers on the new road to recover the project cost. A source said that NHAI believed that if it collected toll for road usage, the project would be unviable. It was then suggested to NHAI that some land instead could be given to it to monetise. The land-owning agency followed this model when it gave Delhi Metro Rail Corporation land for commercial exploitation to fund the projects.

DDA believes the land provided to NHAI along the road will rise in value once the road comes up and the highway body could then be able to monetise the land. It was decided by 2019-end that 125 acres of land would be handed over to NHAI, but the plan couldn’t fructify. Sources said that there were plans to transfer 350 acres of land later, but a final decision on opting for this model or choosing another funding model was yet to be taken.