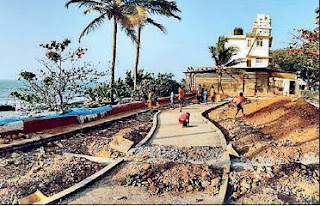 To further extend the Bandra Bandstand promenade, BMC has taken up development of two plots along the seafront. Though these plots have have been reserved as ‘recreation grounds’, they have been lying unutilised for several years.

The plots are being turned into gardens which will have arched pathways, seaside seating arrangement and a jogging track so that citizens get access to more open space on the seafront.

The promenade at Bandra Bandstand is used extensively by people of all age groups and is also visited by tourists to Mumbai.

Corporator from the area, Asif Zakeria who is from the Congress, said that while the promenade is around 1.5 km starting from the Hill Road junction up to B J Road and Kane Road, it can be further extended in a way that citizens get more accessible open space if the two open spaces are developed well.

“For many years I had been pushing for development of these two garden plots that measure 900 sqmt and 1,500 sqmt respectively. Many years ago, in one of these gardens where the historic band stand umbrella stands, the navy used to play its band on Sundays. Over the years, the plot remained unused and so I suggested a plan to connect the promenade to the same. Once it is developed, citizens themselves would keep an eye on it to ensure that the same is not misused,” Zakeria said.

While there is a shed that currently separates the garden from the promenade, he said that if it is removed, there could be continuity for the walkway. Zakeria said that they have also included the views of local citizens in development of the open space.

Rinka D’Monte, a Bandra resident who is also an architect, said that while these were small plots, they could still be developed in a way that they could be added to the larger public open space (Bandstand promenade).