India out of recession 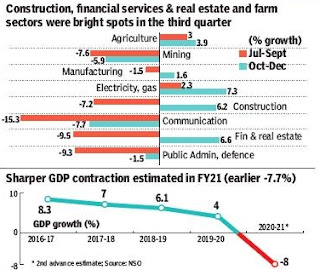 Growth returned to the economy in the October-December quarter of 2020 -21, helping it to move out of the recession that had gripped following one of the strictest lockdowns imposed last year to ward off the spread of the Covid-19 pandemic.

The economy grew 0.4% in the three months ended December powered by manufacturing, farm, electricity, construction, financial, real estate and professional services. The numbers showed the contraction in the June quarter was sharper at 24.4% than the previous estimate of 23.9%, while the decline in the September quarter was revised to 7.3% from the earlier 7.5%. An economy is said to be in recession after posting two consecutive quarters of contraction.

The second advance estimate for the full year showed the economy is forecast to contract by 8%, higher than the 7.7% projected before and mostly in line with other estimates.

The December quarter data also showed that India had joined China, Vietnam and Taiwan, a select group of economies, which have posted growth during the three-month period against the backdrop of sharp declines in major economies of the world hit hard by the pandemic. The RBI had earlier estimated that growth would return in the third and fourth quarters of the current fiscal year that ends in March.

Recent estimates by multilateral agencies and economists have pointed to a rebound in the Indian economy. The IMF has also forecast India to be one of the fastest growing major economies in the world in 2021-22 as growth momentum gathers pace. The rollout of the vaccination programme has added to the optimism, but the resurgence of the virus in some parts of the country has emerged as a risk factor. The finance ministry said the October-December quarter data was also a reflection of a further strengthening of the V-shaped recovery that began in Q2 of 2020-21 after a large GDP contraction in the April-June quarter, which followed one of the strictest lockdowns imposed by the government relative to other economies.