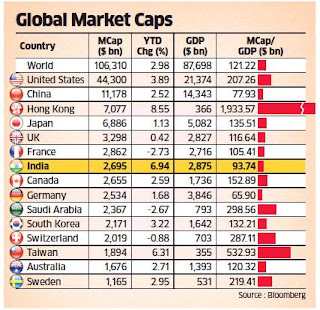 India's stock market has moved up three spots to become the seventh-largest in the world in terms of market value. Local equities, which have added 6.9% so far in 2021, taking the country’s total market capitalisation to $2.7 trillion, overtook Canada, Germany and Saudi Arabia. India is the second-best performer among the top 15 countries in 2021 and is inching towards the sixth position which is currently held by France at $2.8trillion.

Indian stocks edged past Canada after almost 11 months. Europe’s largest economy Germany has a market value of $2.53 trillion. Only two European countries — France and the United Kingdom — are among the biggest seven markets.

The MSCI India index has gained 21% in the last three months compared to 19% by MSCI Emerging Market and 12% by MSCI World indices.

Foreign portfolio investors have pumped in nearly $4.05 billion in Indian equities since January 1, the second-best inflow among emerging markets after Brazil which saw investments of $4.5 billion during this period. Weakness in the US Dollar has helped emerging markets perform in recent months.

Analysts say India has been among the better performers also because of a faster recovery in domestic demand after the Covid-19-led disruptions and the government's focus on reviving the economy.