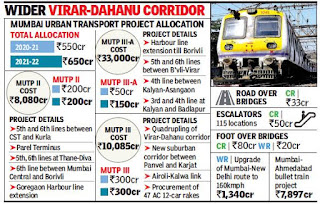 The Mumbai Urban Transport Project, which includes extension of the Harbour line till Borivli, quadrupling of the Virar-Dahanu corridor and procurement of air-conditioned rakes, will receive a boost as the railway ministry has sanctioned Rs.650 crore for the purpose in Budget 2021-22—Rs.100 crore more than for 2020-21.

Budget documents were tabled in the Parliament on Wednesday, two days after the Union Budget was presented by finance minister Nirmala Sitharaman.

MUTP projects are aimed at augmenting the capacity of trains to reduce overcrowding on the city’s lifeline.

Since Rs.650 crore has been allocated for MUTP projects, a similar amount will be allocated by the state government as these works are executed by the Mumbai Railway Vikas Corporation, which is a 50:50 joint venture between the two.

MRVC chairman and managing director R S Khurana said, “The ongoing MUTP projects are at different stages of implementation. We are happy that like the last few years, fund allocation has been as desired and works will get a further boost.” Substantial allocation has been made for bridges too. CR’s chief public relations officer Shivaji Sutar said, “Around 115 escalators have been sanctioned Rs.50 crore on CR, of which around 50% will be in Mumbai. For ROBs, around Rs.33 crore is sanctioned for seven locations.” WR’s chief public relations officer Sumit Thakur said, “We received around Rs.20 crore for FOBs and a substantial sum for escalators.”