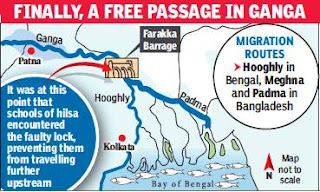 A faulty navigation lock at the Farakka Barrage across the Ganga, which had hindered the migration of hilsa upstream the Hooghly as well as the Padma for 43 years, will finally be set right this year, paving the way for the return of ilish — the fish that brings shimmers of silvery happiness to countless Bengalis — to the Ganga.

Once found in abundance in the river till as far upstream as Allahabad and even further up till Kanpur, the hilsa’s progress beyond Farakka — where the Ganga splits into the Hooghly and the Padma was halted after the construction of the faulty navigational lock in1978.

The project that will see the hilsa’s revival in the river is actually the revitalisation of a navigational channel for passenger and goods vessels to travel from the sea to Allahabad via Kolkata, Farakka, Patna and Varanasi. Work on navigational locks at the barrage, 280km upstream from Kolkata, promises a fresh lease of life for Kolkata Port.

And, no less importantly, it gives gastronomes a reason to rejoice.

The new navigational lock will facilitate smoother and faster dispersal of vessels.

It takes about two hours or more for a vessel to pass upstream or downstream of Farakka through the existing lock. The new lock will reduce the passage time to just 38 minutes. If another vessel moves in the reverse direction, the operating time will be only 23 minutes.

In addition to smoother and faster movement of vessels, fish lovers in Bengal and beyond till Prayagraj will now be able to enjoy fresh hilsa as the new lock will help the fish swim all the way from the Padma in Bangladesh upstream the Ganga,” said an official of L&T Geostructure that is executing the Rs.359 crore project.

Utpal Bhaumik, former division head of Riverine Ecology and Fisheries at the Central Inland Fisheries Research Institute, says reopening the navigational channel would help preserve the biodiversity of the river. “Keeping the sluice gate open at Farakka Barrage higher than the current level for four hours every day will help hilsa swim from the Padma and the Hooghly to the Ganga and lead to greater chances of spawning,” he said.

Bhaumik, though, feels that the quantity of hilsa in the Ganga is unlikely to reach the level prior to the construction of the barrage. “A large volume of fish would have been netted in the Padma before reaching the navigation lock. As for the Hooghly, siltation in the lower reaches of the river has made the fish scarce even in sections closer to the sea. For a true revival, the Hooghly has to be dredged and the silted channel at the mouth of the estuary opened up,” he said.

Sushmita Mondal, who was earlier with the International Union for Conservation of Nature, which has worked extensively with Bangladeshi authorities on hilsa conservation, is also concerned about the fish changing its behaviour following years of facing the obstacle at Farakka. “Before Farakka, some say there was a resident hilsa population downstream. Very little is known about the evolutionary changes that have happened, and how the fish has adapted over the years. There is a need for more studies, particularly after the lock is restored, to know more about the fish. We need a monitoring protocol,” she said.