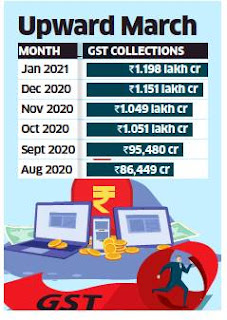 The annual filing of GST returns by the extended deadline of December 31 may also have resulted in some businesses clearing their liability and paying higher tax, say experts.

While finance minister Nirmala Sitharaman is set to lower the revenue estimates for the current financial year when she presents the Budget on Monday, the latest data will cheer policymakers grappling with the worst economic challenge in recent decades.

The numbers based on December sales, with returns filed in January, show that revenue from imports went up 16%.

The mop-up from domestic transactions, including services imports, was 6% higher. “This is much better than anyone’s expectations. Usually, the end of a quarter (December in this case) is better than the initial months as companies push sales to meet quarterly targets. It seems imports have improved considerably. Christmas holidays would have seen marked improvement in people going out and on vacations. Some companies, particularly IT firms, are on a hiring spree, which would have meant more disposable income in the hands of people,” said Pratik Jain, who leads the indirect tax practice at consulting firm PwC in India.

Government sources said the recent crackdown against fraudsters has helped improve compliance and bolstered collections. Since mid-November, 274 people have been arrested with 2,700 cases lodged against 8,500 bogus entities. The drive, which leans heavily on data analysis, has helped collect Rs.858 crore from these entities.

“Closer monitoring against fake-billing, deep data analytics using data from multiple sources including GST, income tax and Customs IT systems, and effective tax administration have also contributed to the steady increase in tax revenue over the last few months,” the finance ministry said.

According to experts, the rising trend will continue in the coming months. “The surge in GST collections observed during the past four months is expected to be sustained in the coming months of the current fiscal with more service sector activities like aviation, hospitality, entertainment opening up,” said MS Mani, senior director at Deloitte India.

While anything over Rs.1 lakh in monthly collections is seen to be positive, for the last four months, the average monthly mop-up has been to the tune of Rs.1.1 lakh crore. The average year-on-year growth in GST revenue over the first four months in the second half of the financial year has been 8%.