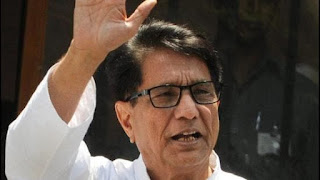 Former Union Minister and Rashtriya Lok Dal chief Ajit Singh died of Covid-19 on Thursday morning. He was 82. Singh was undergoing treatment at a private hospital in Gurugram after he tested positive for coronavirus.

In a statement the family said, “Chaudhary Ajit Singh ji was diagnosed as COVID positive on April

20. He battled his condition till the very end and breathed his last today morning, the 6th of May, 2021”.

“Throughout his life journey, Chaudhary Sahib was loved and respected by many. He, in turn, cherished this bond with all of you and gave his best consideration and efforts for your welfare,” the statement from the family said.