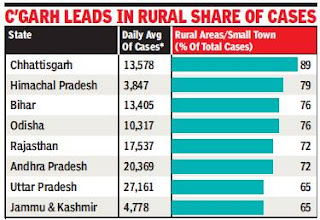 Covid cases have declined in cities, but district-level data shows a surge in small towns and rural areas. In 13 of the 24 states where districts can be split into rural and urban, there are more cases in villages and small towns than in big cities. In the other 11 states, cases are growing faster in rural areas.

The data also suggests that as the Covid wave shifts from cities to towns, the underreporting of cases increases. This is because the smaller centres don’t do enough tests. While one positive result in every 20 tests is considered acceptable, there are many districts where every second test is positive.

Data from Maharashtra shows how the Covid wave has shifted to rural areas. The state averaged roughly 54,000 cases on both April 9 and May 9. But while rural areas had only 32% of the cases on April 9, a month later their share increased to 56%. In Uttar Pradesh, rural areas now have 65% of the cases, and in Chhattisgarh their share is 89%.

In Karnataka, where cities still have more cases, the share of rural areas has risen from 25% to 44% in over a month.

Many of these, such as Nuh, Kalahandi and Rajsamand, are among the least urbanised.