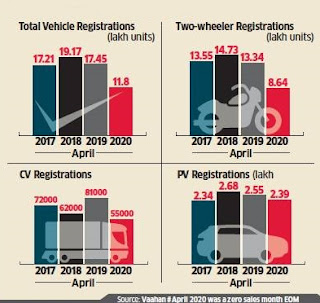 After weeks of pursuing with the dealer to speed up delivery of his Mahindra Thar, Alwar-based Rohan Mehta was allotted the sport utility vehicle out of turn on April16, but was unable to take delivery — scheduled originally for August — as there were four Covid-19 positive cases in the family.

Around 75,000-80,000 passenger vehicles ready for delivery are stuck at various dealerships across the country, according to the Federation of Automobile Dealers Associations of India “In April, we saw 60,000 fewer deliveries of cars and 5 lakh fewer deliveries of two-wheelers,” said FADA president Vinkesh Gulati.

The situation, he said, is a reversal after the uptick seen in retail sales starting August 2020.

An automotive dealer for Mahindra & Mahindra in Alwar (Rajasthan), Nikunj Sanghi, said, “I have some 100 vehicles ready for delivery, but am unable to do so.”

“This period (April, May, June) is critical and the peak time for us, as the marriage and harvest season leads to a lot of new vehicle sales, especially two-wheelers and entry-level cars.”

In fact, the poor delivery schedules of the Thar have even resulted in M&M’s customers switching over to other models, said a dealer who did not wish to be quoted.

Auto retail sales were the worst affected in April and hit the lowest in eight months at 1.18 million units.

“Today, the lockdown is in place in 20 states which account for almost 70% of industry PV sales. Obviously, the retails will be affected both on account of this and also because the consumer sentiment turns adverse the longer the lockdown lasts,” said Shashank Srivastava, executive director of Maruti Suzuki, India’s largest car maker. “Consumer sentiment plays a major role for discretionary products like cars.”

As a consequence, at least 45-50% of the around 26,500 automobile dealerships in the country are shut. Uttar Pradesh tops in new vehicle registrations, followed by Maharashtra, Tamil Nadu, Karnataka and Gujarat.

Auto dealers said that footfalls in passenger vehicle outlets that are open have dropped by 35% in the past few weeks, while the fall has been more than 70% at commercial vehicle and two-wheeler dealerships. In the PV segment, dealers are not too worried as most models continue to have long waiting periods.