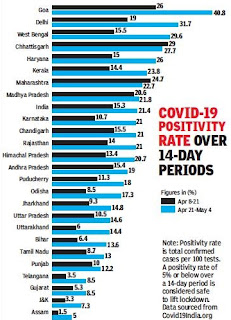 Goa set a new record with 41% coronavirus positivity rate measured over a 14-day period between April 21 and May 4 and there are at least 13 states, including Delhi, where the fortnightly infection rate was more than 21%.

Such a high rate of infection points to under-reported cases and the need to increase testing. Compared to the situation in March, when only one state had breached the 7% positivity mark (over a 14-day period), the fresh outbreak indicates the caseload may remain high even as the second wave has resulted in fresh restrictions in many states. A leading newspaper's fortnightly positivity rate study indicates lack of adequate testing, tracing and treatment.

Covid-19 cases are on the rise in Haryana (26%), Kerala (24%), Madhya Pradesh, Karnataka, Chandigarh, Rajasthan and Himachal Pradesh all having a positivity rate of 20% and above and still rising. A high positivity rate is also indicative of the fact that only the sickest are being tested despite a higher number of positive cases. Nine states have reported a positivity rate between 10% and 20%.