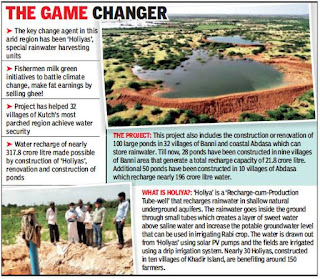 For 12 years on the trot, Ganesh and his wife Parvati had been migrating hundreds of kilometres in search of farm labour with their two daughters and buffaloes from their Ganeshpar village in Khadir Beyt (island).

Solely dependent on rainfall despite having fertile land, the couple could never harvest Rabi crop on their two acres land. But, for the first time this year, the small farm of this couple, expects to harvest nearly 930 kg cumin, which they will sell in Asia’s biggest spice market at Unjha.

Over the years, this island, located in the middle of a salt desert, has seen a sea change in the lives of its residents. One can not only see several swathes of 'oasis' blooming with crops, but people have access to permanent water supply, something that was a luxury till few year back.

The green revolution is not limited to just Khadir Beyt, things have changed for good at many villages in Banni grasslands and coastal Abdasa too. The parched land of theses villages now have a green hue thanks to the National Adaptation Fund for Climate Change project carried out by Gujarat Ecological Education and Research Foundation. The project, the execution of which began in 2018, has changed the life of over 2,200 households residing in 32 villages.

The project is providing livelihood security and precious water to the fishermen community locally known as ‘Pagadiya’ of coastal Abdasa town, the pastoral community of ‘Maldharies’ in Banni grassland and marginal farmers of Khadir Island.

In 2017 the union government sanctioned the, with a budget of Rs 21.35 crore, with an aim to strengthen the natural resources of the region and to give respite to the local communities living here from the effects of climate change. The projects also aimed to restore the ecosystem of the region.

The construction of ‘Holiyas’ and ponds was among the most important part of the project. ‘Holiya’ is a ‘Recharge-cum-Production Tubewell’ that recharges sweet rain water in shallow natural underground aquifers.

“We have planned and executed various rain water recharge structures in both surface as well as underground aquifers. We have created nearly 30 Holiyas and 78 wells out of total 100 targeted which has changed the life of local communities, they are now able to take Rabi crop with the help of water recharging,” R D Kamboj ex-director of GEER Foundation .

“Five farmers use one ‘Holiyas’ on community sharing bases. These Holiya’s have recharged 141 crore litres of rain water into the natural aquifer of which 100 crore litres is available for irrigation,” Kamboj added.

The villagers also use this water for irrigation as well as for livestock purposes. Viram Bhil a resident of Gadhda village owns nine acre land. “Thanks to this project I have cultivated Rabi crop for the first time in my life this year, which has substantially increased my family’s income,” Bhil said.

The fishing community too has new source of income now. They have taken to farming and are cultivating cash crops like groundnut and cotton apart from raising livestock. The cash crop and livestock products such as milk and ghee have increased their income.