Petrol hits a century in Mumbai 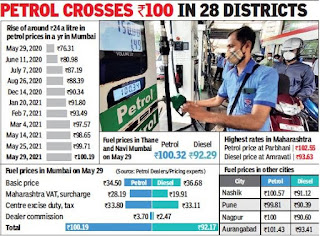 Mumbai on Saturday became the first metro in the country where the price of petrol hit a century and retailed at Rs 100.19 per litre. Diesel, too, hit a new all-time high of Rs 92.17 in the city.

Over the past seven years, there has been a Rs 17 drop in the per litre base price of petrol due to the reduction in international crude oil rates between August 2014 ($118) and May 2021 ($68). Yet, fuel rates have increased due to taxes imposed by both state and Central governments, which contribute to 66% of what a motorist pays, said Kedar Chandak, senior petrol dealer and pricing expert.

Chandak further said the Central government frequently increased the excise duty on petrol. Meanwhile, the state imposed taxes and VAT, the third highest in the country.

Maharashtra earns more than Rs 25,000 crore annually from VAT on fuel. Every one rupee hike per litre of petrol and diesel prices gives the state additional VAT of Rs140 crore and Rs 275 crore respectively, officials said.

Across Maharashtra, 28 districts now have petrol prices of over Rs.100 a litre and the highest rate on Saturday was at Parbhani, at Rs 102.55. The price of petrol in neighbouring Thane and Navi Mumbai was hiked to Rs 100.32 while diesel was a record Rs 92.29 per litre.

Diesel, too, crossed Rs 90 in 32 districts, upsetting transporters. A media statement issued by the All India Motor Transport Congress on Saturday read: “There is a consistent demand from the transport industry to bring diesel and petrol under GST and switch back to an administered pricing regime.”