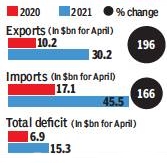 India’s exports nearly trebled to over $30 billion during April from $10 billion a year ago, when production and shipments were disrupted due to the lockdowns in India and many parts of the world. Exports were estimated to be 16% higher than April 2019.

Preliminary data released by the commerce department on Sunday showed that exports were lifted by a healthy growth in key sectors such as engineering, gems and jewellery and petroleum products. But trade deficit widened to $15.2 billion in April as imports grew at a comparatively slower pace. Imports are estimated to have increased from $17.1 billion in April 2020 to a shade under $45.5 billion last month.