12 Lakshadweep islands to be opened for tourists 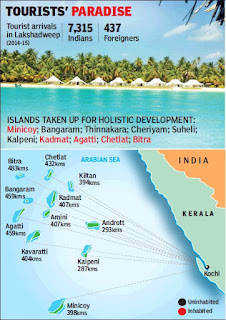 Thinking of white sands, clear lagoons, coral reefs and five star luxury resorts? If Maldives comes to mind, think again. Your next tropical island holiday could be closer home than you had imagined.

Lakshadweep, the tropical archipelago off India’s west coast, is readying to welcome more tourists to its pristine shores. Prime Minister Narendra Modi reviewed the holistic development of islands even as the government moves to open up 12 Lakshadweep islands, some as yet off limits, for tourists and give a leg up to niche tourism in Lakshadweep.

The islands that have been taken up for development include Minicoy, Bangaram, Suheli, Cherium, Tinnakara, Kalpeni, Kadmat, Agatti, Chetlat and Bitra. Director of tourism in Lakshadweep Balram Meena said.

In a bid to ease traffic, the tourism ministry, Niti Aayog and the MHA have said the Restricted Area Permit regime will be relaxed for tourism promotion in Lakshadweep. A public-private partnership package has been developed, as part of which the island administration has begun inviting eco-friendly resorts and scuba diving centres.

To ensure that no ecological damage comes to the islands, the administration, as part of the Island Managament Plan, has finalised suitability reports for each island, and also specified carrying capacity in each case.

Three public-private partnership projects in Suheli, Minicoy and Kadmat are ready to be launched. The government said an investment of over Rs.300 crore is expected from the private sector after these projects are implemented.

Services that the government said it was looking to improve over the months include modern jetties, air, road and web connectivity, good quality drinking water to residents and ensuring regular power supply. Tuna fishing, regarded as heavily underdeveloped in Lakshadweep, will be promoted as part of measures to improve livelihoods in Lakshadweep. During the PM’s review of the development initiatives, it was suggested ‘Lakshadweep Tuna’ should be developed as a brand and officials should consider the possibility of seaweed cultivation to promote local employment.