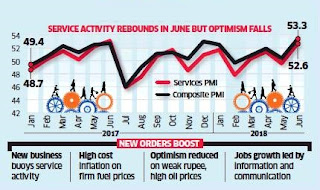 Buoyed by a surge in new business orders, India's services industry expanded at its quickest pace in a year in June.

Data released earlier had showed an equally strong performance by the manufacturing sector, suggesting a broad-based recovery in the economy.

The Nikkei/IHS Markit Services Purchasing Managers' Index climbed to 52.6 last month — its highest since June 2017 — from 49.6 in May and above the 50-mark reading that separates growth from contraction.

The recovery in services firms' activity, along with the robust pace of manufacturing growth reported on Monday, lifted the composite PMI to 53.3, its highest level since October 2016. The strong improvement in demand encouraged businesses to hire at a faster pace last month than in May.

The index is based on a survey conducted among purchasing executives at more than 400 companies that are divided into six categories: consumer services, transport & storage, information & communication, financial & insurance, real estate and business services.

The Indian economy expanded 7.7% in the January-March quarter. Growth this fiscal year is expected to strengthen to around 7.4% from 6.7% last year.

Overall input costs rose at the strongest rate since July 2014, the survey showed, and amid a weak rupee and higher oil prices, inflation may remain elevated.

Retail inflation in May rose to a four-month high of 4.87%, justifying further monetary tightening.

The Reserve Bank of India increased key lending rate last month after four years, as crude oil prices surged and the bank raised its inflation projection. It now expects inflation at 4.8-4.9% in the first half of the financial year and 4.7% in the second, compared with earlier estimates of 4.7-5.1% and 4.4%, respectively.

This raised concerns over growth prospects and optimism faded among purchasing managers, according to the survey, with sub-indexes measuring business expectations and future output dipping to an eight-month low in June.

Despite an improvement in demand conditions, business sentiment across the services sector dropped to the lowest since last October. While optimism was relatively weak, firms still anticipate activity to rise in the year ahead.