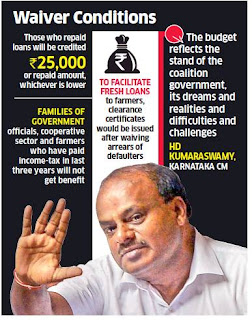 Farmers who have taken agricultural loan up to ₹2 lakh and defaulted till December 31 will benefit from the measure. Those who repaid loans will be given ₹25,000 or the entire repaid amount, whichever is lower. The families of government officials, cooperative sector and farmers who have paid incometax for the last three years will not be given the waiver.

Though the loan waiver may bring relief to farmers, the increase of taxes on petrol and diesel by ₹1.14 and ₹1.12 per litre, respectively, is unlikely to go down well with the public. The tax on electricity too has been raised from 6% to 9%. Within hours of Kumaraswamy completing his budget speech, his predecessor Siddaramaiah endorsed the proposals. However, alliance partner Congress will find it difficult to defend the hike in fuel prices after criticising the Union government for not controlling the surging oil prices. The budget also proposed a 4% hike in additional excise duty on liquor across all 18 slabs, besides raising motor vehicles tax for private service vehicles by 50%.

The chief minister said to facilitate fresh loans to farmers, clearance certificates would be issued after waiving arrears of defaulters. He insisted that despite the waiver, his government was committed to fiscal discipline and will ensure there was no resource crunch for development projects. Kumaraswamy said his government would continue with all programmes Siddaramaiah launched.