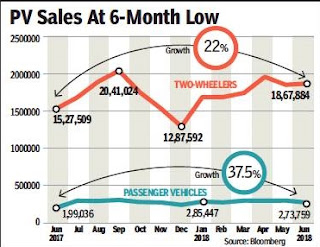 Sales of passenger vehicles grew by 38% in June (year-on-year) on a lower base even as actual volumes were the lowest in the last six months. Deliveries to dealerships were uncharacteristically low in June last year as companies held back stocks in view of a cut in manufacturing duty in the GST era that kicked off from July 2017.

According to numbers released by Siam, passenger vehicles sales in June stood at 2.7 lakh units against 2 lakh units in the same month last year. The growth was led by high deliveries from companies such as Maruti Suzuki, Hyundai, Tata Motors, Toyota and Honda. However, the combined volumes for passenger vehicles were not inspiring in June and were the lowest since January 2018 when the dealer deliveries were at 2.8 lakh units.

Industry analysts attributed the subdued volumes to the “monsoon phenomenon” where demand is usually slower.