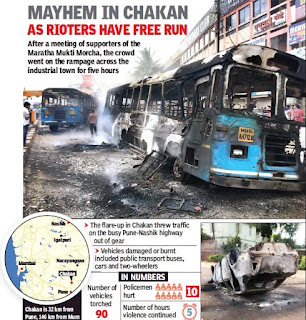 The industrial town of Chakan, 40 km from Pune, which houses manufacturing plants of top automobile firms was held to ransom for five hours by rampaging Maratha protesters. Ninety vehicles, many of them public transport buses, were torched, a police station attacked and 10 cops injured in the rioting that disrupted traffic on Pune-Nashik highway.

The violence came a day after a 35-year-old unemployed Aurangabad man and a Nanded villager ended their lives purportedly in support of the Marathas’quota demand.

Pramod Hore Patil, a resident of Aurangabad, had jumped in front of a train on Sunday. A graduate who’d given the MPSC exams many times, Patil put up a Facebook post at 2.30 pm supporting the Maratha stir and at 4.50 pm posted a selfie at Mukundwadi railway station. In his FB post he wrote, “Chala aaj ek Maratha jaatoy, pan kahi tari Maratha arakshanasathi kara, jai jijauaapla Pramod Patil (today one Maratha is leaving... but do something for Maratha reservation...).” He is survived by parents, wife, and two children.

In Dabhad (Nanded), Kachru Kalyane (42) hanged himself. He is survived by his mother, wife and 3 daughters. Nanded SP C Mina said, “We have found a note saying he ended his life in support of quota but we are trying to confirm its authenticity.” Tehsildar Arvind Narsikar said the family had said Kalyane had been upset for days that he worked as waiter-cum-cook at a dhaba despite being qualified. Narsikar did not know Kalyane’s qualifications.

Pune rural Dy SP and 9 other cops were hurt in Chakan. Police said rioting began after a meeting of Maratha Mukti Morcha at 11 am. SP Sandeep Patil said a probe indicated anti-social elements from neighbouring districts participated in the violence. “They had sharp weapons and fuel cans. It appears a conspiracy.” Dy SP for Khed R Pathare said, “Some trouble-makers had swords.” Cops had to do lathi charge and burst teargas shells at many spots to disperse mobs.