South Korea to put India ties on par with China, US, Japan 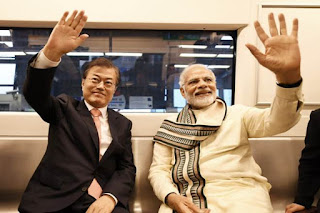 South Korean President Moon Jae-in said he was committed to raising South Korea’s relations with India to the level of those with China, Japan, Russia and the US, as he sought to expand cooperation in areas such as shipbuilding, aerospace, manufacture of medical devices and food processing.

Moon, who was on his first visit to India since being elected president last year, sought an expansion of trade and economic ties with India. He described the opportunities between the two countries as “boundless” in a speech to Indian and South Korean businessmen just hours before inaugurating an expansion of Samsung Electronics’ cellphone manufacturing unit in Uttar Pradesh jointly with Prime Minister Narendra Modi.

The Korean company recently announced it was investing $760 million in the expansion, making the unit the largest in the world, according to Indian government officials. “I am committed to raise relations with India to the level of those with our four major powers around the Korean peninsula,” Moon said, adding that this commitment was embodied in his new southern policy outlined last year.

A report in The Korea Times on Sunday said Moon’s visit to India and later to Singapore are aimed at advancing his “New Southern Policy” with the two countries seen as key elements of the initiative to diversify Seoul’s diplomatic and economic strategies.

India, the report said, was emerging as a key economic partner for Korea, with its huge market whose importance would only increase as South Korea tried to reduce its reliance in its two biggest trading partners, China and the US. South Korean investments in India amount to $4.64 billion between 2000-2017 with Kia Motors announcing a $1.1 billion investment to set up a manufacturing unit in Andhra Pradesh.

“India is witnessing dynamic development,” Moon said, adding that his country would contribute actively to the “Make in India” policy aimed at boosting Indian manufacturing.

The more than 500 Korean companies operating in India were mostly concentrating in the automobiles, electronics and textiles “but going forward, we will expand cooperation to various areas, including shipbuilding, medical devices and food processing,” Moon said.

The South Korean president noted India’s plans to make smart cities and industrial corridors in the country and said his country wanted to participate in these projects given its experience in building such cities back home. “Currently our two countries are discussing building the Nagpur-Mumbai freeway and the Kalyan, Dombivili and Bandra smart cities. The Korean government will tap into the Korea-India financing package worth $10 billion to provide active funding for these infrastructure projects,” he said.

“I have high expectations from the aerospace sector as well... If our two countries can pool our efforts to succeed in lunar exploration, we will bring much hopes and dreams to our people,” he said.

Trade minister Suresh Prabhu invited Korean investment in areas such as manufacturing, services, agriculture and food processing, stating that India was looking at setting up a special economic zone for Korean companies alone.

“Unlike some other countries in the world which like Korean money but not Koreans, we like Koreans more than Korean money,” Prabhu said in an apparent reference to uneasy relations between South Korea and some of its immediate neighbours.

Prabhu and his South Korean counterpart Kim Hyun-Chong signed the joint statement on the Early Harvest package—issues where a breakthrough was achieved—in the India-Korea Comprehensive Economic Partnership Agreement upgradation.