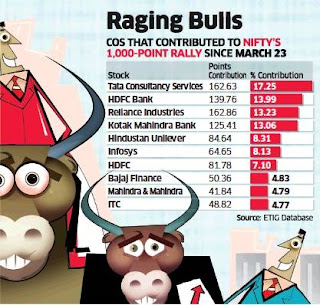 The Sensex closed at record levels and the Nifty reclaimed 11,000 for the first time after five months as stock benchmarks extended their unforeseen bull run, overcoming pessimism over a weak rupee, higher crude prices, global trade dispute and rising US interest rates.

Continued purchases in select bluechips like Reliance Industries, HDFC and Hindustan Unilever, which have been the backbone of the recent strength in Sensex and Nifty, kept the momentum going even as market participants persisted with their bearish outlook on equities in the foreseeable future.