Maharashtra slips to 13 in Ease of doing Business 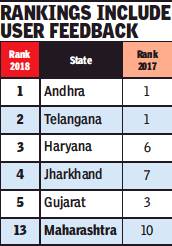 Andhra Pradesh topped the list of states on ease-of-doing-business ranking for the second year in a row, narrowly beating its neighbour and bitter rival Telangana in the closely watched contest. Haryana came in at number 3 while Maharashtra slipped three places to 13 in the latest rankings released by the government.

Unlike the last two editions, this year, the department of industrial policy and promotion teamed up with the World Bank to factor in user feedback while ranking states in addition to the reforms undertaken by individual states. In the past, rankings were based on reforms undertaken by the states and no feedback was taken, as is the case with the global ranking of countries.

Business Reforms Action Plan, or ease-of-doing-business rankings, as they are popularly called, has been triggered by a sharp improvement in India’s global rankings and the stiff target set by Prime Minister Narendra Modi to move the country to the top 50.

Most states have been taking the rankings seriously and see their performance as a key factor in helping companies select their investment destination. The intense competition can be gauged from the fact that the difference in score between Andhra Pradesh (98.4%) and seventh placed Madhya Pradesh (97.3%) was just over a percentage point. At least two states — Telangana and Jharkhand — had undertaken all the reforms, while Andhra, Haryana and Gujarat scored 99.73%.

What made the difference was the feedback from businesses, lawyers, architects and electrical contractors. While 50,000 were contacted, 5,000 responded, a majority of which were businesses. Industrial policy and promotion secretary Ramesh Abhishek said that next year the entire evaluation would be done based on feedback from the industry.

Over the last three years, the reform plan has expanded from 285 to 372 action points and the states and Union territories undertook reforms to ease their regulations and systems in areas such as labour, environmental clearances, single-window system, construction permits, contract enforcement, registering property and inspections, DIPP said. They have also enacted the Public Service Delivery Guarantee Act to enforce the deadlines on registrations and approvals.

While there was stiff competition for the top slots, there were at least three — Arunachal Pradesh Meghalaya and Lakshadweep — which did not undertake even a single reform. Mizoram, Andaman, Manipur and Sikkim undertook less than 4% of the reforms that were listed out by DIPP at the start of the year.

“Several of them attended the video conference sessions but complained of lack of capacity,” said an official. Apart from the feedback-driven ranking system, this year the Centre also decided to pair states, typically a better performer with last year’s laggard or a smaller state, as part of a handholding initiative to improve the overall business environment. 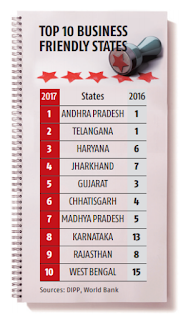