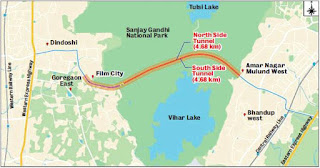 The long-awaited east-west connector, the Goregaon-Mulund Link Road is a step closer to reality. Work on an underground tunnel under Sanjay Gandhi National Park will start in six months after the BMC sealed a deal to buy 19.8 hectares of land abutting the Tadoba Tiger Reserve in Chandrapur for Rs.4.67 crore which will be handed over to the state forest department as compensation. Despite having the rest of the permissions in place for the underground tunnel, the project was held up as the forest department’s clearance was long pending over the compensation clause. Once completed, the 12.7-km long GMLR will connect Film City in Goregaon with Mulund, and a journey that currently takes over an hour will be reduced to 15 minutes. It will be a six-lane road, of which 4.7 km will be a twin tunnel road running underneath the SGNP.

Parag Seth, executive engineer, GMLR tunnel project, said, “This project was subject to the compensatory condition, based on which final clearance for GMLR tunnel will be granted. We have given an affirmation that environmental clearance isn’t required for this project since it is a road marked in the Development Plan. Physically we are not disturbing SGNP at all.”

The BMC had requested the forest department to suggest a land parcel convenient to them. The forest department suggested a buffer zone for their tiger reserve in Tadoba. A buffer zone is the land between a forest area and revenue department area which separates the village area from the forest. Seth said that the procedure to acquire the land from the residents of Chandrapur will be completed in the next two months. Work on the tunnel is expected to start in six months, he added. It is expected to be completed in five years.

The east-west connector was first proposed in the 1960s but the project never took off due to pending permissions. The total cost of this project is around Rs 6,000 crore. In this year’s BMC budget, the civic body has allocated Rs 100 crore for the GMLR project.

Elaborating on how this tunnel will help ease traffic in the city, Seth said, “Presently in Mumbai there is only Jogeshwari-Vikhroli Link Road near this project. After JVLR, there is no link on the north side connecting the eastern and western suburbs. The only link is on Ghodbunder road in Thane. We expect 20 minutes travel time from Goregaon Western Express Highway to Eastern Express Highway,” said Seth.

The Indian Institute of Technology-Bombay will conduct a study on the tunnels’ environmental impact on aquifers above ground and on the Tulsi and Vihar reservoirs in the SGNP, which supply water to the city.