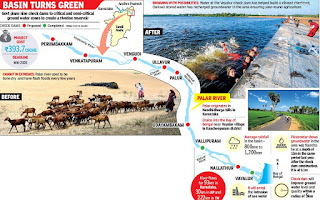 For E Dhamodharan of Esur village in Kancheepuram district, the past three summers have been too harsh. Without enough water, the 39-year-old could not raise any crops on his land and was forced to work for daily wages at a sugar mill in the neighbouring village.

“It is difficult for a farmer to see his land barren,” he says, recollecting the drought that followed Cyclone Thane in 2016. Farmers used to raise paddy in the monsoon and the less water-intensive watermelon in summer. “We used to tap water from the river by sinking a borewell, but that goes dry in May,” he says.

Today, standing on the newly constructed check dam at Esur-Vallipuram, his parched land is a distant memory. The check dam which stores water for nearly 2 km has boosted the groundwater level by at least three metres in the surrounding villages.

Farmers like Dhamodharan, who has been able to resume agriculture full time, see the check dam as a promise of the future.

At another check dam downstream at Vayalur, children hold on to the structure and learn to swim and the river front is the newest hangout spot. Apart from the transformation of the local area, where through irrigation 4,000 people are expected to benefit, the stored water can also be an alternative source of supply for Chennai and its suburbs. Nearly 350 million litres a day of water will be drawn, says an official.

Though only two of the nine check dams planned by the state have been built, the results are already showing, say farmers. These check dams are the first such structures to be constructed across the Palar in 160 years after the Palar Anaicut came up.

The state government proposed to construct nine check dams across Palar river from Avarankuppam till Vayalur, the tail-end of the river in Kancheepuram district, to store water during flash floods in the otherwise bone-dry river. It is aimed at preventing seawater intrusion and to resolve water issues in the drought-prone district. The structures are part of the riverine reservoir system, being created as part of the comprehensive flood mitigation programme.

Annually, around 6 thousand million cubic feet of water drains into the Bay of Bengal from the Palar. “By constructing a series of riverine reservoirs, we can store 3.2 tmcft of water. The stored water will last more than six months and rejuvenate the aquifers,” says G R Radhakrishna, assistant executive engineer of Chengalpet sub-division of the public works department.

The groundwater gauging facility at the PWD’s hydro-geological unit at Panakattucheri, 4 km upstream from the Vayalur check dam, shows a promising sign. The groundwater level is now at a depth of 9 m, about 3 metres higher than in November last year. “After considering various factors including rainfall last year and this year in the catchment area of the river, we found that the groundwater level has shot up by three metres in the past 10 days. It is because of the storage of water at the check dam constructed in the end of October. It is expected to further improve in the coming days,” said another official.

In nearby Parameswarmangalam, the groundwater level has increased by 20 ft to 30 ft in the past two weeks along the riverbed, says N Sakthivel, a local resident and president of the area’s farmers’ association. “We have never seen water in the river for a stretch of a kilometre or more in all these years. Even when it rains heavily, the water would drain into the sea within a few weeks. It is amazing to see the check dam holding so much water following showers during Diwali,” he says.

Small measures like this go a long way, say experts. Former professor of Madras Institute of Development Studies S Janakarajan says flash floods in Palar occur every once in three to four years and most of the water is wasted in the absence of storage structures. “The construction of check dams across Palar is a welcome move but the Palar is polluted from Vaniyambadi to Walajah due to the discharge of industrial effluents. So, steps should be taken to stop the pollutants draining downstream,” he says, stressing on how the government should give equal importance to effectively store rainwater as it does to inter-state water disputes.