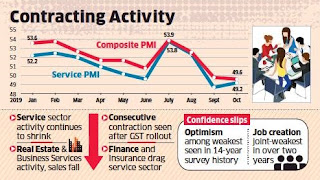 India’s service sector activity declined for the second straight month in October, the first back-to-back reduction since the second quarter of 2017-18, dragging business confidence to its lowest level in almost three years.

Although the IHS Markit Services Purchasing Managers’ Index rose to 49.2 last month from 48.7 in September, it remained below the 50-mark threshold that separates contraction from expansion.

As per the survey report, service sector employment increased for the 26th month in a row, albeit at the joint-slowest pace over this period.

The consecutive contraction in service activity in the second quarter of FY18 followed the implementation of the goods and services tax in July 2017.

Put together, Indian private sector activity decreased for the second straight month in October, reflecting a “notable slowdown in growth of factory production and a further contraction in services activity.”

The Composite PMI Output Index fell from 49.8 in September to 49.6, signalling a marginal rate of reduction overall, the report showed.

Although aggregate employment increased further, the pace of expansion eased to the weakest in over two years. The slowdown in job creation was wide spread across the manufacturing and service sectors.

Total sales were broadly unchanged in October, after contracting in September for the first time in over a year-and- ahalf. Sub-sector data indicated that finance & insurance and real estate & business services acted as the main drag on the Indian service economy, where both business activity and sales contracted. 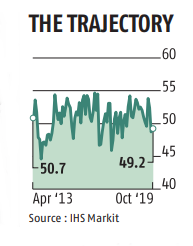