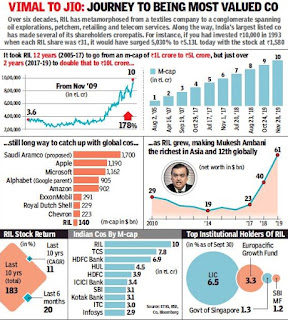 Reliance Industries became the first Indian company with a market cap of over ₹10 lakh crore, as its shares continued the record-breaking run that has made it the world’s top-performing major energy stock in 2019.

RIL, India’s most valuable company, has overtaken PetroChina to enter the top five club of global energy giants (by M-cap). It is now the world’s 67th most valuable stock and has risen 41% this year. At the end of trade Thursday, RIL’s market cap stood at $139.69 billion compared with PetroChina’s $139.32 billion.

RIL’s contribution to India’s total M-cap is now at a decade high of 6.5%. In May 2009, the figure had touched 8.62%. The Mukesh Ambani company has contributed one-third of the total Nifty gains so far in 2019, and outperformed the benchmark index by 30%.

n a note released in October, Bank of America Merrill Lynch had said that RIL could be the first Indian company to touch $200-billion M-cap in 24 months owing to its business transformation plans.

The weight of ‘oil and gas’ in the portfolio of domestic mutual funds has been rising consistently in the past five months and currently stands at a record high, thanks to RIL. The share of energy stocks in mutual fund portfolios rose 8.7% in October 2019, compared with an average of 7.2% in the past two years.

The rally in RIL has been boosted by the re-rating of telecom stocks after the announcement of two tariff hikes that has ended the tariff war in the segment. So far, the basic premise for telecom valuations had been a higher subscriber base driving up profits despite static prices. The higher tariffs could increase average revenue per user, improving cash flows. This would also help RIL achieve its target of becoming a zero net debt company by FY21.

The consumer business accounts for about two-thirds of the fair value of RIL, while the contribution of operating profit is about 33% in the September quarter. The stock is trading at 17.3 times next 12 months earnings, according to Bloomberg data.