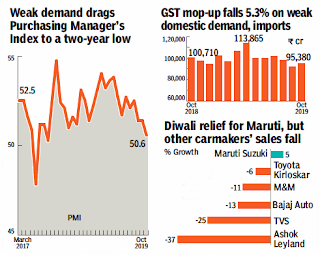 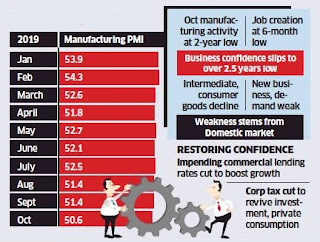 India’s manufacturing activity hit a two-year low in October as new orders and output increased at a slower pace, making business confidence slip to its lowest level in more than two-and-a-half years.

The IHS Markit India Manufacturing Purchasing Managers’ Index fell to 50.6 in October from 51.4 in September, highlighting only a marginal improvement in the health of the manufacturing industry.

A reading above 50 on the index indicates growth while a score below that means contraction.

The private sector data reiterated the slowdown that the Indian economy is undergoing. Official data released on the previous day showed that India’s core sector output of eight major industries had contracted 5.2% in September, its worst performance in 14 years.

The core sector has 40% weightage in the broader index of industrial production, which may now slump further from a 1.1% contraction in August, its worst performance in more than seven years. The Indian economy grew 5% in the April-June period, the slowest in 25 quarters.

The government has announced a number of measures including cuts in corporate tax rate, consolidation of public sector banks and a fund for stressed assets in the real estate sector to lift growth.

As per the report, job creation fell to a six-month low and the upturn in employment was the second-weakest during this period, ahead of that seen in April.

In another sign of subdued growth conditions, input costs declined for the first time in more than four years, showed the IHS Markit report based on the Manufacturing PMI.

The report showed that growth was restored in capital goods but softened in the consumer goods category, while a quicker contraction was registered among intermediate goods makers.

The PMI is based on a survey conducted among purchasing executives in more than 400 companies, which are divided into eight broad categories — basic metals, chemicals and plastics, electrical and optical, food and drink, mechanical engineering, textiles and clothing, timber and paper, and transport.

Manufacturers were at their least upbeat about the 12-month outlook for production since February 2017, according to the report.

While business confidence was gloomy, de Lima said that the impending lowering of commercial lending rates could potentially revive private consumption and help propel faster growth as the year ends. 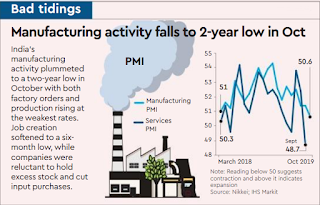