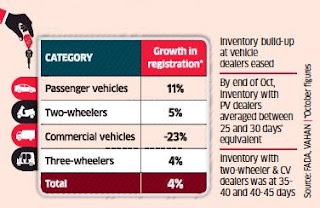 This year India’s two major festivals, Diwali and Dussehra, were in October and they added an extra fillip to retail sales of automobiles in an otherwise particularly bad year for the sector. Sales traditionally taper off in December as most buyers postpone their purchases till after the New Year’s day.

Vehicle registration numbers at regional transport offices, which are a proxy for sales, improved 4% over October last year, as per a report by the Federation of Automobile Dealers Associations, a retailers' lobby body. The Indian automobile industry has been in a tailspin for over a year now with sales consistently falling amidst poor consumer sentiment in the country.

“The festival days saw very good footfalls at dealerships across most of the geographies and the consumer sentiment was positive and purchase decisions were concluded as used to be during the growth years,” said FADA president Ashish Kale.

Inventory build-up at vehicle dealers eased across board, as manufacturers continued to curtail production. At the end of October, inventory with PV dealers averaged between 25 and 30 days’ equivalent, while the figure for two-wheeler and CV dealers was at 35-40 and 40-45 days, respectively. The industry norm is to hold 30 days’ worth of inventory.

However, October was an exceptional month and sales may taper in the remaining two months of this year, experts said. December is usually a month of low sales as many customers delay purchase to January to get newer model-year vehicles.

“FADA remains cautious for the near and mid-term post the festive seasons as BS-VI transition approaches and rural demand is yet to pick up due to extended and excessive monsoon,” the dealers’ body said in a release.

The latest report from FADA showed a trend similar to that of a report released last week by the SIAM, a manufacturers’ lobby group.