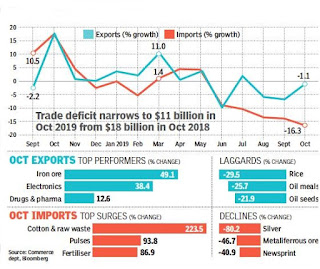 India's exports fell by 1.1% to $26.4 billion in October as shipments of petroleum and leather goods contracted, the third consecutive month of decline for exports while imports dropped sharply indicating demand slowdown.

While the contraction was narrower than the previous month, the latest data adds to the raft of economic indicators which have pointed to a slowdown in the economy. Imports contracted by 16.3% to $37.4 billion, declining for fifth straight month, which helped narrow the trade deficit to $11 billion during the month. The trade deficit in October was $18 billion. The dip in imports was the sharpest in nearly three years.

Oil imports in October dropped 31.7% to $9.6 billion compared to the same period last year, highlighting the slowdown in demand. Exports in the April-October period of the current fiscal year fell by 2.2% to $186 billion, while imports fell by 8.4% to $280.7 billion, a trade deficit of $94.7 billion. Exports have been hit by the slowdown in the global economy, while imports have been hurt due to a demand slowdown in the country. Last month, the WTO said trade tensions and a slowing global economy led its economists to downgrade their forecasts for trade growth in 2019 and 2020.