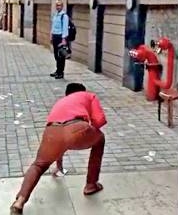 In a scene out of the movies, it rained money on a Kolkata street, triggering a scramble for the Rs.2,000 and Rs.500 notes that were thrown from the sixth floor of a highrise in the middle of a raid by the Directorate of Revenue Intelligence. The shower of notes, which police sources estimated to be in excess of Rs.3.74 lakh, apparently originated from a private establishment at MK Point Building on Bentinck Street. Ajmal Khan, whose works in one of the many offices in the area, said he heard a commotion and stepped out around 3 pm to find “currency notes floating down” from the nearby building. “These were all Rs.2,000 and Rs.500 notes,” he said.

By then, many people had stuffed their pockets with as many notes as they could. The sceptical ones in the crowd seemed to believe recording the sight on their mobile phones was a more valuable proposition. There was no official statement from DRI or police on the authenticity of the notes.